An article on Freedom

The Walk of Wisdom offers a way of finding one’s inner wisdom whilst walking. The purpose is to find peace and quiet, and to slow down while being with nature. Whether walking alone or with companions, in silence or contemplative conversation, the circular 136 km walk offers pilgrims an ecology for reflection. Beginning and ending at two churches in the city of Nijmegen in the east of the Netherlands, the route meanders through the countryside of two countries and 11 municipalities.

The Irrepressible Spirit of Hope

In South Sudan you can be understood if you think that there is little to be hopeful about. Decades of civil war and violent tribal conflicts, coupled with perennial flooding and the negative effectives of the COVID–19 pandemic have left millions of South Sudanese hungry, homeless and insecure. More than a half of the country are staring starvation in the face.

You are made of Stardust

Pause for a minute and look at your hand. One of the atoms forming it may have come from Orion’s belt. Perhaps an atom on your thumb was once part of a star cluster that exploded a million light-years ago.

Since the famous astronomer, Carl Sagan said, “We are made of stardust,” the science of studying and understanding the universe has brought us increasing evidence of this amazing truth.

Inside difficulty lives opportunity. Inside the suffering and fear of the times we live in, perhaps we can also find opportunity. Our ancestors lived in a universe, in a cosmological order, whereas many of us today grow up focussed on living only on a planet. Our ancestors gave stars names and mythologies, made them part of life. The nightly cycle of Ra was as real to the ancient Egyptians as the rhythms of the Nile’s flooding. The pandemic has forced life to slow down for many of us. There is time now to watch the bird in the tree, to marvel at the budding of life, to feel the inner reflections, to look again at the stars in the night sky.

Recent scientific research into something called entanglement shows connections between separated particles that persist regardless of space and time. It suggests the possibility that our minds are physically entangled within the universe. Photons from stars constantly interact with each other in the same way our heartbeat interacts when dealing with another, or a group of women’s monthly cycles can synchronise when they are in close proximity. It’s awe inspiring that after two atoms meet, they remain connected wherever they are in the universe. If something changes with an atom in Orion’s belt, might we unknowingly start scratching our hand?

Once, humans thought this planet was the centre of the universe, and the church fought the idea that the planet circles the sun. Only a century ago, astronomers thought the Milky Way was the universe with the solar system its centre. Then in 1915, we discovered that the sun is around 50,000 light-years from the centre of the Milky Way. This was a milestone moment in the history of astronomy. This was bigger than the planet not being the centre of everything. It was the first measurement that relegated us as being far from the centre. Our egos took a big bashing.

As technology developed, so the universe grew, and we shrunk. The knowledge of the universe today can seem too big for us to handle. Its immensity too vast to comprehend, so we often try to shrink it down to fit in our comfort zones.

Sitting under the night sky, wondering what parts are connected to what can give the feeling that it is One Thing.
As Willis W. Harman once said, “Perhaps the only limits to the human mind are those we believe in.”

So as we stare at our hand, what about the parts of us that are less physical, and therefore only partly bound by physical laws, such aspects as our thoughts, our intuition, our mind, our feelings? Might we be more integrated with the universe than we thought? 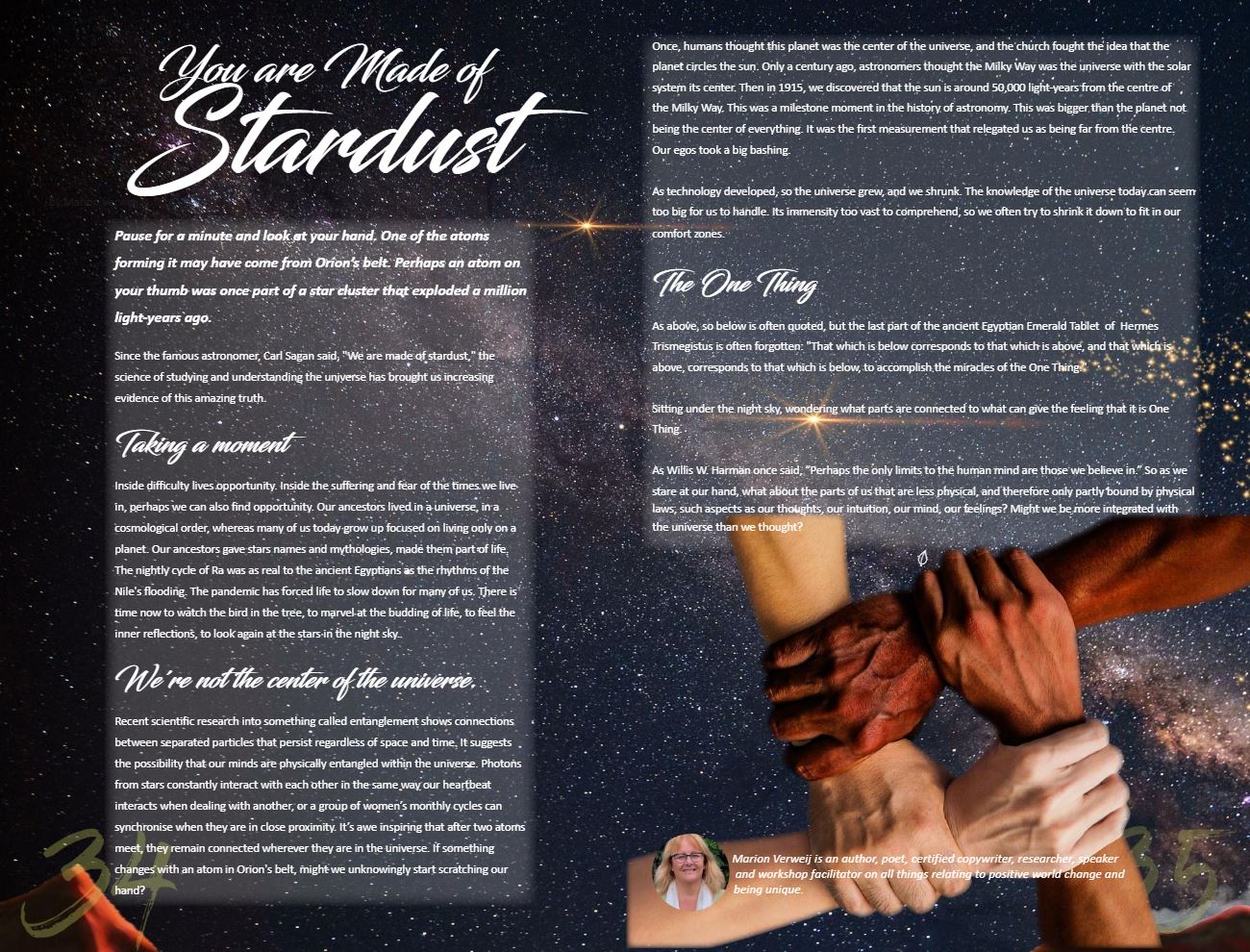 Article in bUneke Scarves with a message Dec 2020

A Prayer into the World is a Danish design project creating scarves that are designed to carry meaning through words, images and clolour. Born from the desire to create something that would add value into the world, Marianne Lundhus and Malene Maxon design and produce the scarves from their workroom just outside Copenhagen in Denmark.

Article bUneke What is the Electric Ecosystem?

Sander Funneman has been researching the fascinating electrical ecosystem of the planet since 1986 when he attended a lecture about the idea that ‘everything works by electricity and magnetism’ What started as a light-hearted investigation grew slowly into something more serious. Along with the inspiration grew a concern about the use of artificial radiation in the envireonment. In March 2019 Electric Ecosystem was published.

These Lions are Found in Two Places in the World: Lions

Ishasha sector of Queen Elizabeth National Park in Southwest Uganda is home to 24 tree-climbing lions, one of the two places they can be found in the world.